Who was St Mary

The Cult of Mary 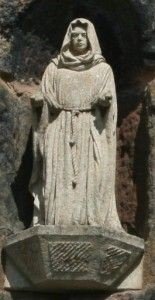 Our Church is dedicated to St Mary the Virgin. St Mary is a very significant saint which is shown by the five days that are ‘Mary Days’ in the Anglican calendar: the Annunciation on 25 March, her Birthday on 8th September, her conception on 8 December and the visit to her cousin Elizabeth on 31 May.

In fact, since the year 2000, the Church of England has made 15 August the most important festival to Mary, known just as the Feast of the Blessed Virgin Mary because this is in line with the wider church which keeps this day. For both Anglicans and Roman Catholics, Mary is so important we venerate her, which means respect and honour, Blessed Mary – for this reason she has a significant part in our devotions, worship and prayers because it’s her son, Christ, who is the one who saves us.

Whilst the Protestant reformers reacted strongly against the excesses of piety centred on Mary, her place and that of all the saints in the Anglican tradition was never in question. The Church of England was founded on the teaching that

As Our Lady is a key player in scripture – being central in the story of Jesus’ birth, supporting him during his adult ministry and being with him as he died on the cross, there can be no doubt that the story of Jesus does not work if Mary is left out.

Similarly in all the Creeds, Mary is there, and the Council of Ephesus in 431 declared Mary, to be theotokos, or God bearer. This is fundamentally important because we should neither focus on Mary to the point where we forget that salvation comes through her Son, Jesus, but it is an equally grave error to play down her part in these events.

There are three areas where an Anglican understanding of St Mary is helpful in focusing on Christ as the centre of our lives and the one who saves us. The very human Mary. We move from the point where Our Lady is the Queen of Heaven, as in Roman devotion, to a young girl who fully shares our human experience: after all she was a women, a wife, a mother and she knew all about care of a household and the nurture of a child, she was rejected at the inn door and suffered as she lost her son. And it’s these human characteristics that ensure that Jesus, her son is fully human and fully divine.

I mentioned earlier that the Council of Ephesus declared Blessed Mary as the one who carried God; the significance of the council in our understanding of Mary’s part in God’s plan is that she’s given the prime place in rejecting the heresy that there were two separate and distinct persons – Christ the God, and Jesus the man. Mary plays her part in Salvation.

The Church of England from the beginning saw no problem acknowledging Mary’s part in the work of God to save a fallen world. This is because of those aspects of her personality which we learn about in the Gospel Canticle known as the Magnificat, – Our Lady was humble, a modest young girl chosen by God, a willing participant in God’s plan who didn’t reject her call or walk away – in simple terms Mary shows humble obedience to what God wants her to do, and so the Protestant reformers believed she was deserving of honour. Mary as Mediator.

We must always remember that Mary’s place in the story of her son was determined by God to highlight, rather than eclipse the work of Christ. We know that Jesus in his daily ministry used other people to reinforce his message and carry on his work. The disciples are primary examples of this, and so it is with Mary who witnesses to Jesus’ ministry by being constantly at his side, even to the end.

Any parent can feel for a mother who sees her son injured, or worse still, killed; and those images, known as the Pieter, where Mary wraps her arms around her dead son as he is taken down from the cross can do no less than connect us emotionally with

Our Lady’s grief. And so she is a mediator for God’s grief as His Son also dies. We now see the whole Christian story, the whole of Christian history and the whole of our lives in these events of joy, grief and eventual glory. We thank God as we acknowledge Mary’s part echoing the words of cousin Elizabeth in the gospel by saying, ‘Blessed are you among women and Blessed is the fruit of your womb Jesus’.